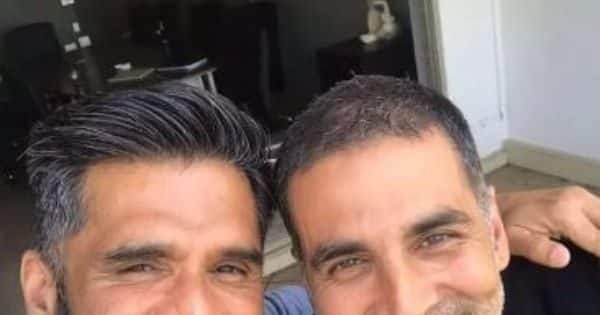 Hera Pheri 3 film has been in the talks lately. Fans have been upset because Akshay Kumar will not be seen in the third part of the movie. Akshay had clarified that he will not be seen in Hera Pheri 3 reportedly, due to creative differences. Suniel Shetty who was busy with the promotions of his next offering Dharavi Bank opened up about why he feels Akshay is the best fit for Hera Pheri 3. It is interesting to note that Suniel Shetty, Akshay Kumar and Paresh Rawal’s 2000 movie Hera Pheri and 2006 movie Phir Hera Pheri was a hit when it had released and to date has a fan following. [Also read:Hera Pheri 3: Suniel Shetty to get Akshay Kumar to change his decision? Says, ‘Makers are in talks with Kartik Aaryan for…’] Also Read – Drishyam 2 star Ajay Devgn, Salman Khan, and more Bollywood’s A list stars educational qualification will leave you shocked

Talking about Akshay being irreplaceable in Hera Pheri 3, Suniel said, “As there is some Hera Pheri that has happened. He (Akshay) has agreed to do the film and suddenly I hear that he is not doing the film. I have been releasing Dharavi Bank and did not get a chance to sit with the producer. I know one thing for a fact that Hera Pheri is being made. Firoz Nadiadwala will let me know what the Hera Pheri is all about”. Talking about the comedy movie series, it is around Raju aka Akshay Kumar, Shyam aka Suniel Shetty and Babu Bhaiya aka Paresh Rawal who make silly plans to earn money. [Also read:Hera Pheri 3: Akshay Kumar breaks silence on Kartik Aaryan replacing him as Raju; says, ‘I was not satisfied…’]

Here, check out a throwback snap of Suniel Shetty-Akshay Kumar Also Read – Hera Pheri 3: Suniel Shetty to get Akshay Kumar to change his decision? Says, ‘Makers are in talks with Kartik Aaryan for…’

Talking about the new cast of Hera Pheri 3, Paresh Rawal a few days ago on his Twitter handle had confirmed that Kartik Aaryan will be seen in Hera Pheri 3. Reportedly, Akshay had expressed his disappointment related to not being a part of Hera Pheri 3. He had reportedly said that he was not happy with the script of the movie and this was the reason, he had decided to go out of the project. Watch out this space for more entertainment news. Also Read – Amitabh Bachchan, Anushka Sharma and more stars who lost their pets [View Photos]