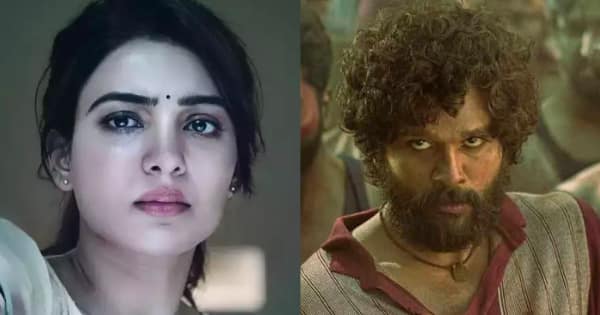 From Samantha Ruth Prabhu starrer Yashoda box office collection to Allu Arjun starrer Pushpa 2 movie update date, Varisu update and the new look of Jr NTR and more have made it to the South Movies Newsmakers of the day. A lot happens in the film world as it never sleeps. And the South industry being one of the vastest industries ever, there are a lot of updates every single day. So, without further ado, let’s catch up on what made the news…

Samantha Ruth Prabhu – the name is enough to make it to the Entertainment News section every day. Yashoda was released yesterday in cinemas. The film has minted Rs 6.32 crores at the worldwide box office. Yes, you read that right. Samantha and Yashoda, both, are winning the hearts of the audience and how!

Also Rad: Samantha Ruth Prabhu starts working out post myositis diagnosis; thanks her fitness trainer for not letting her give up

Harisha Shankar to make a film with Salman Khan?

Harish Shankar was going to make a film with Power star Pawan Kalyan called Bhavadeeyudu Bhagat Singh. However, since the actor is busy with his political work, Harish reportedly wants to move on with another project. A report in Telugucinema.com revealed that Harish has narrated a story idea to Salman Khan and has impressed him. It is also said that he has also approached Vijay Deverakonda for another film.

Prabhas has Salaar, Project K and Adipurush in his kitty right now in films. Prabhas is working relentlessly on Deepika Padukone and Amitabh Bachchan starrer film, Project K by Nag Ashwin. The shooting is proceeding very smoothly and the latest update on the same is that Ram Gopal Varma is going to make a cameo in the movie.

RRR star Jr NTR has two films in the pipeline right now. His new look is going viral. Hairdresser Aalim Hakim shared an uber-cool video of Jr NTR in his new look. Jr NTR has created a frenzy amongst his fans with the same. Check out the video below:

Allu Arjun, Rashmika Mandanna and Fahadh Faasil starrer Pushpa The Rule is one of the widely anticipated upcoming films. The Sukumar directorial is currently being filmed. Fans will get an update on Pushpa 2 soon. A report in Pinkvilla stated that a one-minute-long video from Allu Arjun’s test shoot will be released on 17th December. Yes, you read that right.

Thalapathy Vijay and Rashmika Mandanna starrer Varisu is scheduled for January 2023 release. The film is garnering a lot of buzz. The Vamshi Paidipally-directed movie’s audio launch will be held on December 24, states a report in Pinkvilla. The reports claimed that it is likely that the Varisu trailer will be released on the same day. However, it is not confirmed yet.