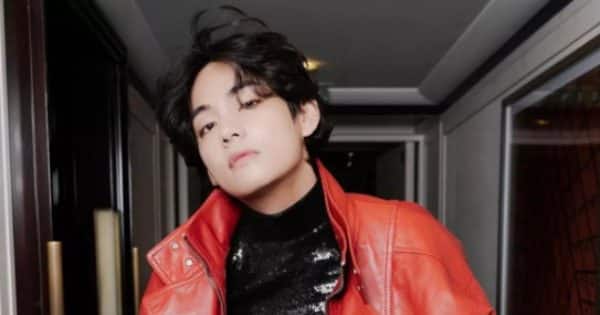 BTS member Kim Taehyung is in Paris. Well, it was speculated that he is flying to Qatar or Mexico but he is back in one of his favourite cities. There are no details on the project. ARMY is speculating that he could be shooting one of his music videos in the city. As we know, his solo album is going to drop in December 2022 or maybe in the first half of 2023. Kim Taehyung looked incredibly handsome even though he was tired after a long overnight flight. The Winter Bear singer greeted fans who screamed We Love You on seeing their idol.

His last trip to Paris, France was for his Fashion Week appearance for Celine. He has been trending on Twitter for four days. He was a guest at a show where Lisa of Blackpink was the brand ambassador of the brand. Kim Taehyung’s Paris trip grabbed a lot of attention. He has always said that he loves the city to bits. Here are the videos of Kim Taehyung at Paris’ Charles De Gaulle airport.

Someone brought VxVOGUE magazine to the Airport ?

Kim taehyung sending flying kisses to armys at Paris. He is so cute aww

BTS member Kim Taehyung was reported to have flown to Mexico for the show Youn’s Kitchen. There are rumors that he will be seen with Park Seo Joon and Choi Woo-Shik on that show. It is very much possible that he has come for a brand shoot. The fashion king of K-Pop has over 50 million Instagram followers, and has made Hollywood news throughout 2022. Jeon Jungkook is in Qatar for the FIFA World Cup where he will be singing at a solo stage. Let us see how BTS V aka Kim Taehyung surprises us now!