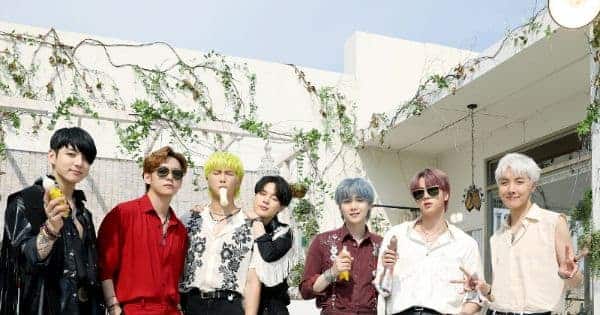 Kolkata fans of the K-Pop group BTS have an extra something to cheer about. A fan has shared a video where we can hear Yet To Come being played in full blast on a loudspeaker at a Durga Puja pandal. This is very unusual. Of course, the popularity of BTS has made inroads into India’s hinterland. We showed you how Jungkook’s photo was used by an English coaching institute in Haryana. His pic is also popular in the barber shops of small-town India. But having BTS songs played during what is seen as a religious and community occasion is quite unusual. Also Read – BTS’ Kim Taehyung-Jennie dating rumours: BLINKS get restless as 15 people form a group to ‘politely’ approach the Blackpink rapper

But then, Durga Puja is synonymous with music and dance. After every evening aarti, there is talent show or people bring musicians/artistes over for some dance, music, drama, recitation and what not. There is a concerted effort on part of Durga Puja pandals across the country to make kids aware of the heritage, culture and tradition behind the festival. This is a way to attract the youth. Moreover, maximum K-Pop fans in India come from the eastern part of the country. Take a look at the video… Also Read – BTS: Jimin gets death threats from a Kim Taehyung-Jungkook stan; ARMYs slam the toxic shippers [view tweets]

Today’s highlight: @BTS_twt ‘s Butter, PTD, Yet to come, For Youth playing at a Durga Puja pandal in Kolkata… This is a very very rare occurance. I almost cried.?#BTS #mahasaptami pic.twitter.com/iAnMtwzVZ7

The above video was played on the occasion of Mahasaptami which is devoted to the worship of Goddess Kalratri. She is one of the most fierce forms of the Goddess. Bengali BTS ARMYS have been wishing one another on social media. This is the time of the year when Bengalis rejoice their hearts out. For young people, it also means fave music. Also Read – BTS’ Kim Taehyung and Jennie’s dating rumours reach insane level as plans to confront latter surface; Blinks furious over privacy invasion

Lucky fans can see the band in action at the Busan concert. They are practising really hard for the same. Namjoon informed that the dance practise has started. We wish BTS the best for the upcoming endeavour.