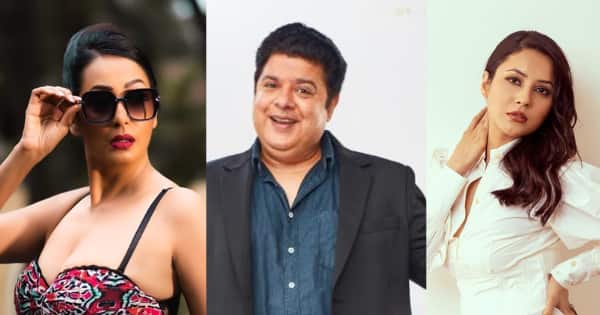 Bigg Boss 16 commenced a couple of days ago. 16 contestants entered the house on Saturday night and already a lot has happened inside as well as outside the house of Bigg Boss. On the grand premiere night of Bigg Boss 16, we saw Sajid Khan entering the house as a contestant. He received a special message and support from Bigg Boss 13 fame Shehnaaz Gill. Even Kashmera Shah had praised Sajid Khan for his honesty while on stage with Salman Khan. After that, there was a huge negative trend against Kashmera on Twitter. And now, the Bigg Boss 1 contestant has defended her statement. Also Read – Bigg Boss 16: Tina Datta, Priyanka Chahar Choudhary, Soundarya Sharma and more ooze oomph in bikini, swimwear and bold outfits

Kashmera Shah has not been the one to mince her words and has always spoken whatever she felt like. However, her tweet about Sajid Khan’s entry on Bigg Boss 16 was not well received. A lot of Tejasswi Prakash and Karan Kundrra aka TejRan fans lashed out at her and had been trending ‘KASHMERA SHAKAL DEKH APNI,’ on Twitter, remembering the incident between Tejasswi and Karan in Salman Khan-hosted Bigg Boss 15. Kashmera had lashed out at Karan back then. And when she praised Sajid Khan for his honesty and also praised Farah Khan for her advice, she met with a lot of criticism online. And now, she has defended her tweet. Also Read – Bigg Boss 16 star Sumbul Touqeer is a fantastic rapper, Divyanka Tripathi is a rifle shooter and more: Hidden talents of TOP TV stars will leave you amused

A netizen had asked about the opposite trends for Shehnaaz Gill and Kashmera Shah. While Shehnaaz was being praised by her fans, who had come to her defence over her video, Kashmera got only criticism. Kashmera Shah replied to the tweet saying she is being thrashed by the paid PRs. She added that if she paid them, they’ll start a positive trend for her too. She also expressed her support for Shehnaaz Gill for speaking her mind. Kashmera added the hashtag ‘give people a chance’. Check out the tweet here: Also Read – Bigg Boss 16: Sumbul Touqeer’s rap over ‘women empowerment’ written by her father hits hard; netizens say, ‘She owned it’ [VIEW TWEETS] 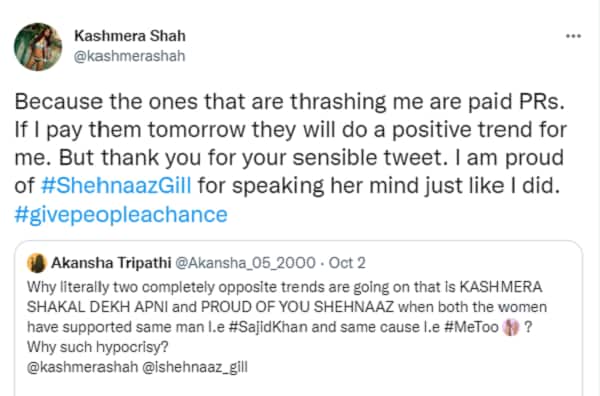 Because the ones that are thrashing me are paid PRs. If I pay them tomorrow they will do a positive trend for me. But thank you for your sensible tweet. I am proud of #ShehnaazGiIl for speaking her mind just like I did. #givepeopleachance https://t.co/EV5n9F3nsZ

Talking about Shehnaaz Gill’s video message for Sajid Khan, she asked him to keep entertaining everyone like he did with his films and shows. Meanwhile, inside the house, Sajid Khan is having a fight with Shalin Bhanot.