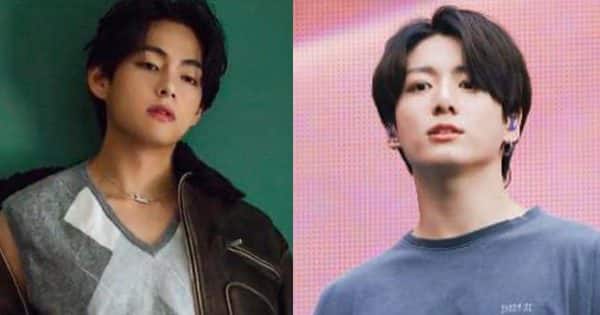 BTS members Jungkook and Kim Taehyung are now out of Korea. The former is in Qatar where he will be performing at the Al Bayt Stadium for the opening of the FIFA World Cup 2022. His presence is creating some controversy as Dua Lipa has opted out saying that she does not support the restrictions on the LGBT community. ICYMI, homosexuality is considered to be criminal offence in Qatar. The officials have said that while the LGBTQ community is welcome, they cannot campaign like holding pride flags and so on. There are rumors that even Shakira might skip the opening ceremony of the World Cup 2022 due to some personal issues. This means that BTS Jungkook will be one of the biggest acts for the day. He has already gone there for rehearsals and recording his parts for the tournament.

As we know, the Run BTS choreography is going viral everywhere. Jungkook has done a cute version of it and shared on his Insta stories. He is seen in black baggy pants and a white shirt. TaeKook fans are happy as even Taehyung shared a small video from his hotel in Paris. We can see him shirtless on bed.

Also Read – BTS’ Jungkook aka Jeon Jungkook named the Most Famous K-pop Idol in the US; here’s why the Golden Maknae is so popular

if i had a nickel for every time we saw taehyung shirtless this year so far i’d have six nickels
pic.twitter.com/uVhyCBsmz8

TaeKook fans are over the moon seeing their two faves post at the same time. The Run BTS Tik Tok is viral and how. We have seen Yeonjun from TXT do it, as has Hoshi from SEVENTEEN. The girls from New Jeans Minji and Haerin have also done it. Also Read – Trending TV News Today: Simba Nagpal-Tejasswi Prakash shoot for Naagin 20-hours a day, Nia Sharma wears power suit similar to BTS’ Jungkook and more

Anyways, I’m still laughing at JKs story lol. Didn’t anyone wake RM up? I can picture taekook messaging him saying Hyung, u didn’t post my song.?

BTS members are now busy with solo projects. J-Hope will be doing a solo dance performance at the upcoming MAMA Awards. RM’s new album Indigo is going to be out on December 2. ARMY is totally spoilt with new content.