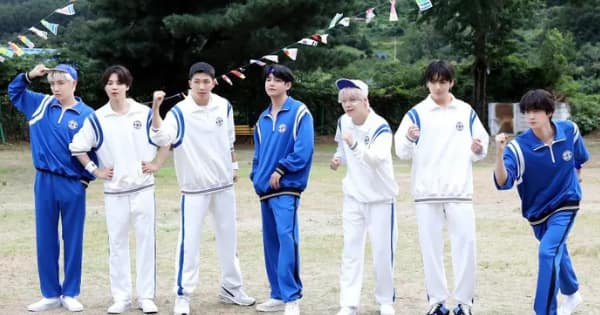 BTS ARMYy’all have a goofy video featuring BTS uploaded on Bangtan TV. We are sure y’all would have been missing the Bangtan Boys a lot, especially, seeing them together all time. With Run BTS coming out in parts and the members – RM, Jin, Suga, J-Hope, Jimin, Taehyung and Jungkook – focussing on their solo projects, there’s hardly any time we have seen all seven of them together. And now, Bangtan TV has shared a video wherein the members have reacted to the special 8 Foto folios.

Since this is the new video, it is bound to go viral and trend in Hollywood News. The video features BTS members sitting together and having a look at the series of photoshoots that they conducted. The Bangtan Boys begin with a series of group photos. The first one was the casual shoot which was done all by themselves and the second one was from BTS Sports Day.

The Bangtan Boys revealed that the photoshoot was conducted about 2 or 1.5 years ago. OMG, the kind of content they must have shot and worked on after that, imagine ARMY! Coming to the special 8 Foto Folio series, the boys talked about their childhood memories and the memories from their shoot.

After having a look at the group photos, the Bangtan Boys looked at the concept Foto-Folios of each member. Since only Jeon Jungkook aka Jungkook, Kim Namjoon aka RM and Park Jimin aka Jimin. They were bowled over by the different and amazing concepts and the results, obviously.

ARMY looks forward to the other members’ Foto Folio

ARMY wants to see the pictures of other BTS members, that is Taehyung, Jin, Suga and J-Hope ASAP. The reactions in the precap of the episode have left ARMY very curious. Check out their tweets here:

omg tell bts i miss them

tell the tannies i love them ??

oh god i miss bangtan so much omg thank youu

we’re gettin their reactions for the photofolio ☹️?? thank you!! @BTS_twt

ohmygod thank you so much ???? pic.twitter.com/X3FntQJmRe

Got confused of the layout I had to double check if this is the official account ??

I‘m so curious for the ones to come
#BTS #Bulletproof Boy Scouts #Photo_Folio pic.twitter.com/L8QD9FzXZ1

That’s me, at every opportunity, “BTS Paved the Way!” But seriously, 1.5 years ago? Guys, we are good until 2025! Whatever they’re doing now will be released in 2025! ??✌️ #BTSARMY #BTS_RunBTS #Photo_Folio #YetToCome #BTS @BTS_twt pic.twitter.com/Kj60PxWPHj

? This is BTS ‘reaction to Hobi’s photo folio… who knows what awaits us ??#Photo_Folio @BTS_twt pic.twitter.com/tjg7v3BNz2

Meanwhile, apart from this new content addition, we also have RM’s solo album, Jin’s Drunken Truth, Jimin and Taehyung’s solo albums as well. Jin will reportedly enlist in the military in December.