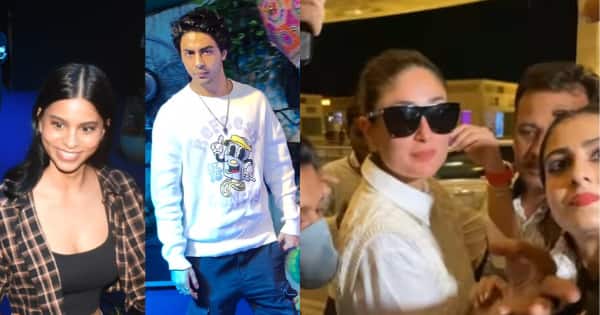 Let’s catch up on the big news from the world of entertainment. From Kareena Kapoor Khan, Aryan Khan–Suhana Khan, Dhanush to Bigg Boss 16 and more have grabbed headlines today. Yes, you read that right. Aryan and Suhana attended the movie screening in the city today evening. Kareena Kapoor was mobbed by her fans at the airport. Dhanush and Aishwaryaa’s divorce is in the news again. Well, Bigg Boss 16 is one big topic in the trending news these days. So, here we are with a wrap on trending Entertainment Newsmakers.

Kareena Kapoor Khan gets mobbed by her fans

It was a shocking sight for everyone, including Kareena Kapoor Khan at the airport. Bebo was mobbed by her fans for a selfie. Kareena who was making her way inside the airport was pulled and made to pose for selfies with her fans. The actress tried to maintain her calm throughout but it was a very scary and sorry sight indeed. Check out the whole story and watch the video here.

Sona Mohapatra took to her Twitter handle and slammed the makers and the channel of Bigg Boss 16 for getting Sajid Khan on board as a contestant. Sona asked the TV marketing team to make a show with molesters, abusers and other MeToo accused men. She also dragged Farhan Akhtar into the same. Read full details here.

Ananya Panday is one of the newest actresses we have in the industry. She made her debut in 2019. Ananya is the daughter of Bhavana Panday and Chunky Panday. Recently, Bhavana was asked about the dating and linkup rumours of her daughter Ananya. She was asked if it affects her as a mother to which Bhavana replied saying that Ananya has chosen this life for herself. Read Bhavana’s take on the same here.

Alia Bhatt was recently honoured at the Time Impact Awards. She wore a stunning copper-coloured gown for the do and stole hearts with her baby bump and the speech. During the speech after the Brahmastra actress received her award, Alia revealed that the baby has been kicking her relentlessly, sharing his/her happiness. Read more here.

Madhuri Dixit, Gajraj Rao starrer movie Maja Ma’s screening was held in the city today. Karan Johar, Aryan Khan, Suhana Khan and the cast of Maja Ma along with other celebrities attended the special screening. Aryan and Suhana, however, did not pose for the paparazzi. Karan also hugged Aryan. Check out the videos here:

Dhanush and Aishwaryaa to rework on their marriage?

In January this year, Dhanush and Aishwaryaa Rajnikanth announced their separate after being married for 18 years. It came as a huge shock for their fans. There were reports stating that Rajinikanth had been wanting the two to work things out and reconcile. And now, the latest report states that Dhanush and Aishwaryaa have put their divorce on hold and are trying to work things out, a report in Pinkvlla read.