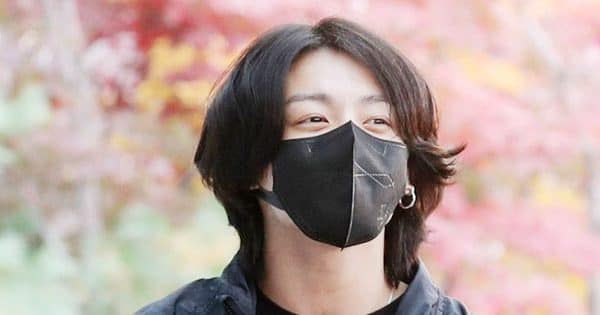 BTS member Jungkook has left for Qatar. He was seen today morning at the Gimpo Airport of Korea. Jeon Jungkook is flying on a chartered plane to the capital of Hamad. This is his second trip in a month. Jungkook will be performing solo at the big stage. The other artists who will take the stage are Shakira, Diplo, Black Eyed Peas, J Balvin. It is not known which song Jeon Jungkook will be performing on stage. The inauguration will be telecast on November 21 in India. BTS fans can watch it on the sports channel. Jungkook looks super excited for the same.

He was seen at the airport in black track pants, tee and a jacket from Nike. He carried a huge tote bag. Jungkook put down the bag as he did a soccer kick much to the delight of the news personnel who came to click his pictures. Jungkook had been in Qatar before where they gave him a royal welcome. He filmed a short clip in a souk (market).

ARMY is totally gaga over his cuteness. Jungkook looks super excited about going to FIFA World Cup 2022. Kim Taehyung aka BTS V said that he was spending time with his parents before he left for Qatar. His song Left and Right was one of the longest charting for 2022 in the Billboard Music Charts.