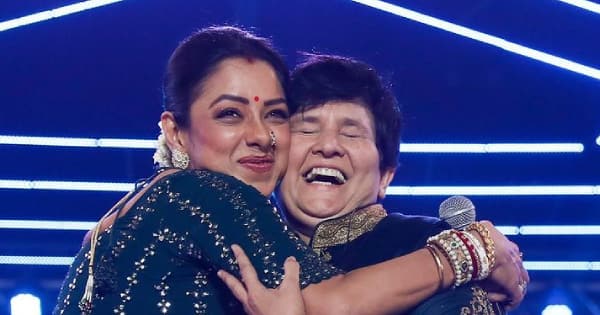 It’s Navratri time and everyone is in the mood for Garba. Even Bollywood and TV stars are totally in the mood to enjoy Garba night. Falguni Pathak‘s event are always a hit and this year we witnessed many big stars making their appearance felt. Hrithik Roshan, Rashmika Mandanna, Pooja Chopra, and many more grooved on the tunes of Garba queen Falguni Pathak. The latest one to do so is Anupama country star Rupali Ganguly. A new video of her has hit the internet and it is pretty interesting. Also Read – Anupamaa: Zain Imam to enter Rupali Ganguly-Gaurav Khanna’s show; Kinjal’s new love interest to bring MAJOR twist?

The video has Rupali Ganguly sharing the stage with Falguni Pathak. The actress also recreates her famous Aapka Kya dialogue from the show. She gave it a Navratri twist and stated that she can do Garba all night, wherever she wants, ‘Aapko Kya’. The audience went berserk and said ‘Aapko Kya’ with her. Falguni Pathak standing next to her appeared completely mind blown by it. Also Read – Anupamaa, Ghum Hai Kisikey Pyaar Meiin, Imlie and more TV shows gear up for a bumper dhamaka during Diwali week [Exclusive]

Check out Falguni Pathak and Rupali Ganguly’s video below:

Talking about the show Anupamaa, it is currently ruling the TRP charts. Rupali Ganguly plays the lead role of Anupamaa and the current story track is about Toshu going against her as Kinjal has left him. Toshu cheated on Kinjal and she left his house to stay with Anupamaa and Anuj played by Gaurav Khanna. The interesting story plot has helped Anupamaa reach the number one spot on TRP charts.