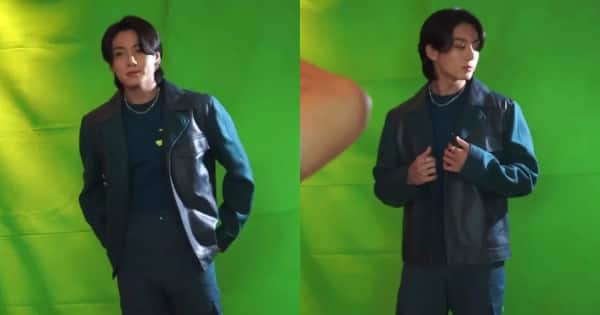 BTS‘ youngest member Jeon Jungkook is in Qatar for the FIFA World Cup 2022. It is one of the widely anticipated sports that everyone across the globe is looking forward to right now. FIFA is beginning on 20th November and various celebrities such as Nora Fatehi, Jungkook of BTS, Black Eyed Peas, Robbie Williams and more are said to perform at the opening ceremony that will be held in Al Bayt Stadium. While football fans are looking forward to the matches, BTS ARMY is looking forward to the golden Maknae Jungkook’s performance at the opening ceremony. Also Read – BTS Jungkook at FIFA World Cup 2022: Golden Maknae has cutest reaction as a little girl at Qatar mall treats him to his iconic line

BTS member Jungkook has been in Qatar for a couple of days now. He has been trending worldwide and in Hollywood News for his upcoming performance. And just a couple of hours ago, Big Hit Entertainment revealed the poster of Jungkook’s performance which is called Dreamers. The poster was dropped a couple of hours ago and ARMY went gaga over the same. Jungkook is collaborating with Fahad Al Kubaisi for Dreamers. Also Read – BTS: Jungkook’s birthday celebrations kick off; Pakistan, Korea, Philippines ring in Jungkook Day with art and social work [View Pics]

A video clip of Jungkook posing for the Dreamers’ poster photoshoot is currently going viral. The young and handsome hunk is seen in oversized white boots and monochrome attire. Jungkook posed away for the camera but ARMY noticed his shyness. Check out the video here: Also Read – BTS’ Jungkook aka Jeon Jungkook named the Most Famous K-pop Idol in the US; here’s why the Golden Maknae is so popular

Jeon Jungkook while filming a poster for his song for the 2022 World Cup؟!؟? pic.twitter.com/4gHaXJvyVF

A couple of weeks ago, Jungkook was in Qatar for a promotional shoot for the FIFA World Cup 2022. His pictures and videos from the shoot went viral. Of late, he grabbed headlines for his interactions with fans while being out and about in Qatar. His clip of interacting with a little ARMY won a lot of hearts. Meanwhile, BTS will soon enlist in the military after wrapping up their schedules.